We have 5 copies of this charming book to give away to our lucky readers! Head to our instagram to enter @StyleTails.

For years, cats have had the literary upper hand over dogs. Sure, the canine contingent has greats such as Dick King Smith’s The Sheep-pig, or Jack London’s Call of the Wild, but it’s never come anywhere close to the epic that is Old Possum’s Book of Practical Cats. Published in 1939, this quirky collection of verse penned by T.S. Eliot has been part of our cultural consciousness ever since, going on to inspire hit musical Cats – which has been performed pretty much everywhere in the world.

But a new book written by poet Christopher Reid and published by Faber, is finally ready to redress the balance. Old Toffer’s Book of Consequential Dogs features a cast of roguish pooches, all of which would be perfect canine companions for T.S. Eliot’s cats. Would the poet have approved? We have no idea, but we did manage to speak to Christopher to find out more about the book, and uncover exactly where he stands on the age-old dog vs cat debate. Why do you think it’s taken so long for someone to do a dog version of Old Possum’s Book of Practical Cats?

That’s a question I have sometimes asked myself, without arriving at a confident answer. No doubt the virtuoso quality, the dazzling technique and imaginative abundance of Old Possum’s Book of Practical Cats has something to do with it. Who would dare to compete with Eliot in those departments? It would take somebody very foolhardy to attempt it. Somebody like me…?

What made you want to write it and how long did it take?

The idea was put to me by Clare Reihill, who runs the Eliot Estate. I thought about it for less than a second before answering yes. Once a contract had been signed, the poems came running towards me, like dogs demanding to be taken for a walk. The whole book was written in about six months.

The illustrations by Elliot Elam are key. What made him the right choice?

Elliot drew the cover for an earlier book of mine, Six Bad Poets, and his interpretations of my six characters were astonishingly true to my own vision of them. Since then I have followed his blog, where he posts drawings mainly of people seen on public transport and sketched on the spot, drawings full of spontaneous vitality. He’s not just an outstandingly skilful artist, but a highly sympathetic one too, and deserves to be as well known as Chris Riddell or Axel Scheffler.

Did you take inspiration from any real-life dogs?

There’s only one poem based on a dog I’m personally acquainted with, and I’ve changed his name to protect his reputation. The rest came out of my imagination, though I don’t doubt that many decades of idle and happy dog-watching helped. Do you have any favourite characters from the book, and if so, why?

I’m indiscriminately fond of all of them. If I had to pick out a couple, I’d nominate Lola, the poodle who runs away to join a circus and ends up not just performing all the acts but owning it as well; and Bess the Peopledog, who does to humans what sheepdogs do to sheep.

Which one would you want as a pet of your own?

There are just one or two I’d definitely not wish to have at home; otherwise, the rest, eccentric and unruly as some of them are, would be most welcome. 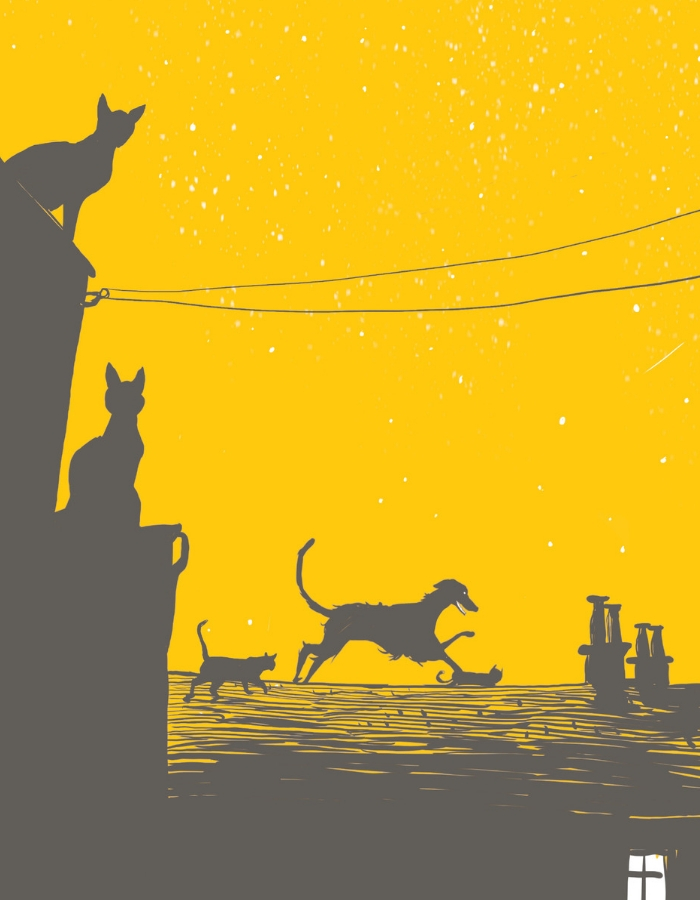 We’re assuming you’re a dog person, rather than a cat person. Can you tell us about the pet dogs you’ve had?

Actually, I’m equal in my affection for dogs and cats. Does this make me unusual? As for pets, I have very fond memories of Butch, a bull terrier that my parents owned when we lived in Hong Kong, for the first few years of my life. Later, my mother had a dachshund, Judy. I’ve never led the sort of life that would permit me to own a dog myself, but I look on this as an advantage, allowing me to be completely promiscuous in my love of dogs.

GIVEAWAY: Win a Copy of Dog Years by Amanda Jones

We adore this heartwarming new book by photographer Amanda Jones so much that we are giving two copies away! Dog Years: Faithful Friends, Then…