The literary world has produced some of the most beloved dogs of all time – think Timmy from Enid Blyton’s Famous Five or Eric Knight’s Lassie, who went to inspire a long list of on-screen adaptations. But it’s not just authors – artists and photographers have also paid tribute to our four-legged friends, snapping them for glossy coffee table tomes, and capturing them in pen, paint and ink. So without further ado, here’s 8 of the best reads for all you dog-loving bookworms. This follow-up to TS Eliot’s Book of Practical Cats waxes poetic about dogs of all pedigrees. Verses about Flo the Philosophical Foxhound and Frazzlesprat – a pooch who nurtures ambitions of being a cat – are accompanied by charming illustrations by Elliot Elam, who’s a deft hand at capturing the waggy tails and head tilts we love so much. Due for release on the 6th September, we will be giving some lucky readers the chance to win signed copies. Join our community of modern dog lovers to be the first to enter! IN DEFENCE OF DOGS BY JOHN BRADSHAW

If you’ve ever wanted to delve into your dog’s behaviour, you might find some answers in this book by biologist John Bradshaw. It dispenses with long-held myths and misconceptions about the inner wolf, instead exploring the psychological reasons behind why pooches behave the way they do.

FLUSH: A BIOGRAPHY BY VIRGINIA WOOLF

Virginia Woolf – an unlikely name for the world of dog biography – fictionalised the life of much-loved spaniel Flush in this book, which borrows details from letters written by his owner and poet Elizabeth Barrett. This one’s a more lighthearted read than Woolf’s other novels, described by The Guardian as “an afternoon’s delight for dog-loving readers”. “It’s wit and whimsy and sniffing, snuffling playfulness will amuse anyone who’s ever known a spaniel,” wrote Justine Hankins for the paper.

London photographer Tim Flach has a natural ability when it comes to documenting dogs. His simply named coffee table collection brings together pooches of all kinds – everything from Crufts superstars to humble hounds, all photographed at choice moments. CALL OF THE WILD BY JACK LONDON

No list of literary dogs would be complete without Jack London’s Call of the Wild. The novel follows the story of Buck, a pampered pup turned feral dog who shows some serious dedication to his rescuer. This one’s an absolute classic, and questions just where the line between domesticated pet and fearsome wolf lies. Work by more than 30 photographers is brought together in this book, which explores our relationship with our four-legged friends, as well as the visual history surrounding them. There’s portraits of all kinds to be enjoyed here, everything from William Wegman’s refined Weimareners, to Sophie Gamand’s wet shaggy dogs.

THE PHILOSOPHY OF SNOOPY BY CHARLES M SCHULZ

He might only be a cartoon dog, but Snoopy is perhaps the best-loved beagle in the world. Based on one of Charles M Schulz’s own pets, he’s appeared in hundreds of comic strips atop his trademark red kennel – a stand-in for the Sopwith Camel he pilots. Who better to share their take on life? 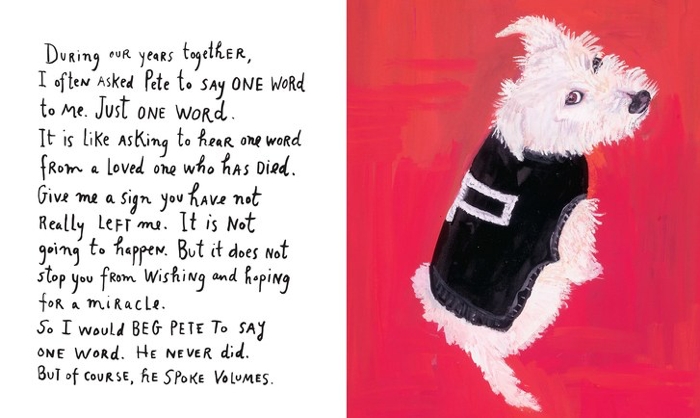 This love letter to pups, by New York Times visual columnist Maira Kalman, is both moving and amusing in equal measure. It recounts the stories of her many pooch encounters, including with her own terrier Pete – a mischievous Irish Wheaten, and “a very good dog”. Buy it for Kalman’s beautiful illustration work, but keep it for the stories.