According to studies, having a dog in the office reduces stress and increases productivity – so staff needn’t have a ruff day again! Ahead of Bring Your Dog to Work Day on the 23rd June, here are some of the coolest dog friendly companies to work for from around the world. 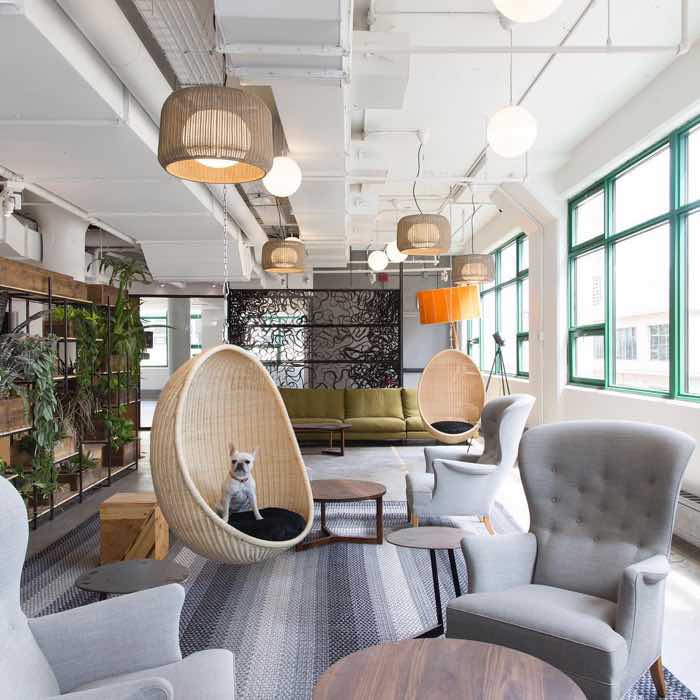 The online marketplace has had a dog-friendly policy in place since it began in 2005 and hasn’t looked back since. Hoover and Starbuck are just a couple of the regular pooches seen lounging around the Brooklyn headquarters. According to employee experience manager Sarah Starpoli “bringing our dogs to work helps keep spirits high and fosters a sense of community and connection that is paramount to what Etsy is all about”. Google has been long-touted as one of the best companies to work for, with a whole range of schemes to keep employees happy – including allowing dogs in the office. They do have a slightly stricter policy than other companies to ensure that all workers are happy with the arrangement and issue employees with a basic set of guidelines including cleaning up after their dog and being mindful of allergic co-workers. Google are definitely more dog than cat though – the Google Code of Conduct states: “Google’s affection for our canine friends is an integral facet of our corporate culture. We like cats, but we’re a dog company, so as a general rule we feel cats visiting our offices would be fairly stressed out.”

You might not find Fido packing your orders anytime soon, but anyone visiting Amazon’s headquarters in Seattle are likely to see a few dogs keeping workers company on any given day. It all started with a Corgi named Rufus (he even has a building named after him now) and now all employees are allowed to bring their dog to work, but must first register their pooch as a workplace dog and ensure their furry friend is up-to-date on vaccinations. Amazon dogs aren’t allowed to just roam around – after all customers might not appreciate teeth marks in their packages – so while in the office they must remain on a lead or in an office with a closed door – but they do get biscuits at reception and special doggy drinking fountains. Things are pretty crowded in the Soho offices of Ridley’s Scott’s film production company. Apart from the high-profile comings and goings, the company has no less than five resident dogs! Home to RSA Films, an award winning film production company founded by acclaimed Directors Ridley and Tony Scott, and creative agency Quiet Storm, some of the regular pooches include Ralph an 8-year-old Jackahuahua, Oscar a 5 ½ year-old Jack Russell Cross and Boss a 1 ½ year-old Teacup Maltese Terrier. Fashion designer Henry Holland often has his French Bulldog Peggy accompany him to the House of Holland studios in London, where she hangs out with her other office dog pals. Peggy has even inspired a range of dog wear and makes regular appawrances on the Henry Holland Instagram account – as well of having her own feed, of course! Massachusetts based pet product start-up Kurgo is a hot contender for the prize of most dog-friendly office. Not only are dogs allowed to hang out while their owners work, but the whole office has been designed to welcome canine chums – with the huge warehouse kitted out with all manner of doggy delights. Each worker has their own “pen” with fake grass and a dog-door, whilst meeting spaces allow for dogs to roam freely. There is even a dog shower area and special dog feeding station. Best of all – being a dog product company, there are always plenty of toys around for the in-house dog tester to get their paws on.

Ice cream and dogs? We need to get a job at Ben & Jerry’s! Not only do employees get free ice cream, frozen yogurt and sorbet on a daily basis, they can also take their pooches to work with them. There is a regular pack of what they call their “K-9 to 5’ers” in the Vermont-based headquarters, with plenty of dog biscuits to get them through the day. There is even a dedicated page for all the Ben & Jerry’s dogs on their website. The successful start-up has two office dogs, Biscuits and Oliver, who are regulars at the Airbnb San Franciso headquarters. Add to that ping pong tables, casual dress codes and office yoga classes – when can we start?! Looking for a dog-friendly office of your own to rent? Then look no further than WeWork in London’s trendy Old Street. Imagine stripped-back interiors, bare concrete and bold wall art – topped off with large communal spaces and private meeting rooms for conducting meetings. Of course not forgetting that pups are allowed to join you every day so you can get your best work done with your four-legged friend by your side! WeWork also offer dog-friendly offices at other locations worldwide, including New York and Mexico City!

Bring your Dog to Work Day is a UK nationwide event on the 23rd June to raise money for animal charities including All Dogs Matter. Find out more about the benefits of taking part.

Caroline is a writer and marketer, currently working as the Head of Digital for the UK Kennel Club. Caroline has previously contributed to publications including Time Out Dubai, Wallpaper* and the World Travel Guide. In her spare time she combines her love of dogs and travel, taking her rescue dog Rudi on as many pooch adventures as possible, whether it's a weekend break in Paris or seeking out the most dog-friendly pub in London.

StyleTails caught up with official voice of the London 2012 opening ceremony, the lovely Layla Anna-Lee to talk about that moment with the Queen, hot boys…