Construct your own cat condo with Poopy Cat

Firstly, let me say that any company that uses a giant cat butt hole on their website is already a winner with me (seriously check it out). As if things couldn’t get any better, crazy Dutch cat entrepreneur Thomas Vles has just cycled more than 300 miles from Amsterdam to London with his two cats Mushi and Cheesy, to launch his cool new pet brand Poopy Cat in UK.

Inspired by the Popemobile (someone throw him a pizza!), the custom made ‘Kittymobile’ was specially converted from a traditional Dutch bakfiets bicycle for the journey. Check out their adventures in the video below.

Launched in 2014, Poopy Cat’s BOXES are already taking the feline world by storm. The sustainable modular cardboard units can be crafted into pretty much any kind of playhouse for your pussies. From giant towers to robots and space ships – the possibilities are endless. The clever design also means you can build a playhouse to fit any space – even small apartments. 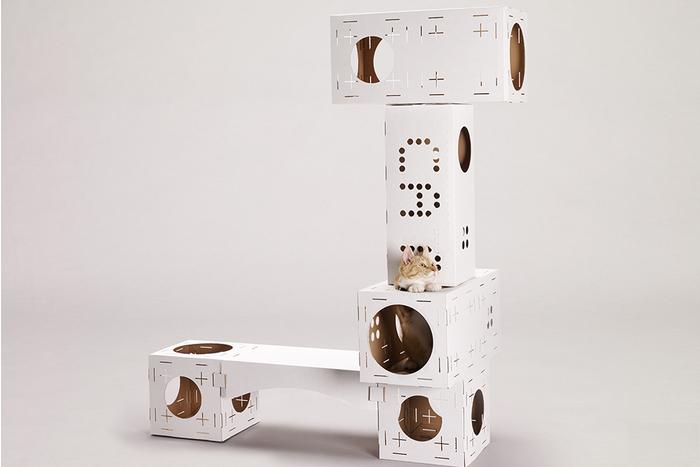 As well as the BOXES, Poopy Cat have also launched a collapsible, recyclable cardboard litter box, which can be bought as a subscription so you never run out out. Had enough yet? If you’re still in need of a feline fix, check out Poopy Cat’s viral music video – ‘Do you want my purr purr’, by the Poopy Cat Dolls – the world’s first cat pop group. Then go have a lie down.

For the person who dotes on a Dachshund and fusses over a Frenchie – we present the our gift guide for the Dog Lover….