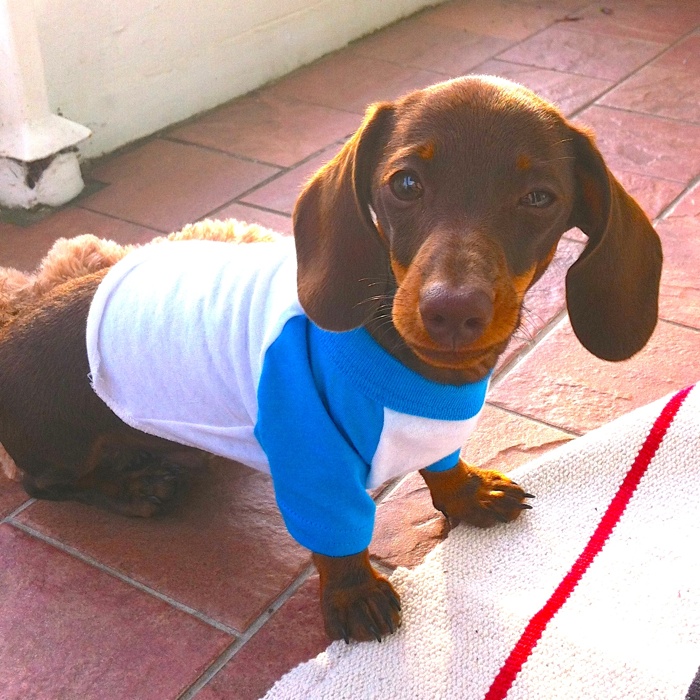 The proudest or potentially most embarrassing experience for any dog owner – puppy class. Our columnist Nick Roberts takes his ditty Dachshund Otto to his first ever puppy class – but can this little guy do as he’s told?

The challenge that lay before Otto was his toughest yet. Life had be relatively easy for my young pup. His greatest accomplishments so far had been weeing where he should do, sleeping the whole night in his own bed and not having a mini meltdown when being taken for a walk outside. Even these wins were only achieved by a whisker in some cases. What Otto was faced with now eclipsed anything he had before. He was undertaking the end of puppy class challenge at his first visit. Luckily he was well prepared after his first hour’s lesson.

We decided enrol Otto into puppy classes as soon as he was allowed outside. Following his timidity with other dogs on his first walks, we felt assured that this was the right decision. Emma had found that the Kennel Club provide a ‘Good Citizen Dog Training Scheme’ with classes local to us. This is the largest dog training programme in the UK, with four levels of courses available, from Puppy Foundation, all the way up to gold. The very helpful Tina, one of two regular trainers, gave us all of the information we needed. The foundation classes would run for eight weeks, over which time he would learn a variety of basic skills and would have valuable interaction with other young dogs.

Tina advised us that the first class was the most important. The commands that would guide you through the entire eight weeks would be covered in the first lesson so, whether work managed to stop Emma or myself attending one week, we would both know the basics from that first class and would be able to use these principles in the future classes.

We arrived at the church hall, where the class was taking place, with excitement and apprehension. First timers were asked to arrive earlier, in order to fill out a little bit of paperwork and so the pups can get used to the venue and their class mates before the training starts. We waited for fellow newbies to turn up. First to arrive was Frazer (an inquisitive and beautiful black Labrador) followed by Lumen (a lively but trepidations Akita) and Hugo (a rather scampy Border Terrier). The dogs and owners got to know each other, not in the same way of course, and the class got underway. 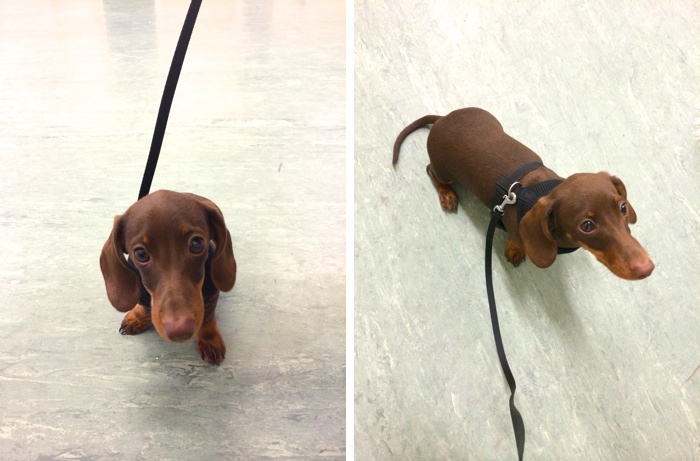 First lesson was walking in a controlled manner. We were instructed to keep Otto on our lefthand side, with the lead in our right hand. Our left hand was filled with treats, that would encourage our dogs to follow us. We all set off around the hall with varying levels of success. Frazer the labrador, as you may expect, taking to this like a duck to water. Otto was initially class dunce. He looked up at us, expectant and confused. He walked for a little bit, then stopped, then looked at us confused again. I felt as though I had failed as a puppy parent. Frazer’s owner had done so well in getting him to obey her. Where had I gone wrong? Tina kindly reassured me that some puppy’s simply take a little longer to pick commands up, and perseverance was the key.

Perseverance and praise, it seemed was the best way to get our pup’s to fall in line. The most important lesson was that carrot was certainly preferred to stick if you want an obedient dog (unless it’s a stick that you want the dog to chase and play fetch with you – I doubt any dog would chase a carrot). Treats would encourage our pups to follow our commands and our treat of choice was some juicy chopped chicken that we had prepared earlier that day. Otto loves chicken, however we quickly found our that this was perhaps not so practical, ending up with a greasy handful of chicken bits quickly into the class. Tina suggested small squares of cheese or garlic sausage; the latter being irresistible to dogs apparently.

Once we had all walked in a controlled manner, we practiced sit, stay and recall. Otto progressed well throughout this process, performing some tasks adeptly. My earlier fears that he would struggle at puppy class washed away and I was proud of his progress after only an hours worth of training. At the end of the class we were brought into the main hall, where the more advanced puppies had been having their lesson, giving Otto a chance to meet more dogs. He was the smallest by at least half, but seemed to enjoy the attention from both humans and his fellow canines.

Standing with the rest of the puppy owners, I reflected on a successful first lesson, watching Tina set out a small obstacle course that I assumed the experienced dogs would be undertaking for the enjoyment of us first timers. When Tina called Otto up to the starting line, I was taken aback. Surely such a novice could not complete the gruelling challenge ahead of him. Not wanting to show either of us up, I confidently strolled to the starting line and nervously waited for instruction.

Otto had his lead taken from his harness and I was told to zig zag him through a daunting array of cones. Deep breath, off we go……To my relief, Otto followed my commands and was gingerly making his way around the course. We was doing very well, paying attention to what he was being told and not putting a paw wrong. We were half way around the course. It was not going to get any easier.

The second half was a selection of mini jumps that puppies were encouraged to hop over before reaching the finish line. The jumps were no more than a couple of inches from the ground, a cinch for any puppy. Unfortunately, not for my puppy. Otto meandered up to the first barrier, which reached his breast bone. He tried to put a paw over the first hurdle, but quickly pulled it back. His look of dejection in front of the impeding barrier made him look like someone who had just tried to blag their way into a VIP party, only to be ridiculed by an arrogant doorman. Tina to the rescue. The hurdles were modified to allow Otto to skip over them and he was on his way again. He completed the course to cheers from my fellow human students. The pups seemed less impressed at his feat, but you can’t please everyone.

Columnist Nick and his wife Emma have just welcomed Otto, the criminally cute chocolate Miniature Dachshund into their lives. Nick shares the trials and tribulations of fumbling through life as a new puppy owner.

Cat cafes are so passé (kidding, they of course still wondrous), now it’s all going to the dogs. Dog lover and rescuer Sarah Wolfgang…