StyleTails’ columnist and new puppy owner Nick Roberts takes Otto, his furry, four-legged pal on his first trip to the seaside. What could go wrong!?

‘That is a SICK dog!’ said the One Direction looking lad, pointing out Otto to his lanky mates as they strolled along the sea front. I had worried Otto was a little small for his age but never expected to be confronted by such concern at his stature. Was he peaky looking? Why would his appearance cause such exclamation from random passer by? It turned out, as we were in darkest Essex, that this was a complimentary statement aimed at my beloved pup, whilst he enjoyed his inaugural beachside stroll.

Otto had been allowed to leave the flat and go on walks for just over a week by the time he took his first visit to the seaside. We had ended up in Canvey Island, a small and marshy heap of South Essex, famed for its petrochemical refineries and as the birth place of the pub rock scene of the 1970’s. This wasn’t our first choice. We had checked StyleTails for the best dog friendly beaches to take Otto for his first experience of sand, sea and sniffing and the beautiful Littlestone Beach was decided on the perfect spot for a stroll.

Fates conspired against us, however, so we had to go closer to home. Friends of mine with children bemoan the military operation required for even the most simple of journeys. The bags that need packing. The items that, under no circumstances whatsoever, can be forgotten when venturing out. How they laughed when I sympathised with them. ‘Puppy’s are nothing compared to babies’ they retorted. They did not consider however that for every moses basket, see dog basket. For those pre-prepared bottles of milk, see bowls and food. For every bag of nappies, see poo bags. Do new parents have to deal with their little bundles of joy trying to chew their laces as they get their shoes on? It’s parents who have it easy.

So once we had everything packed and was ready to go, we decided that a trip to Canvey, to see our friend Casey and her one year old Chihuahua Buddy was more realistic. Otto’s forays into the outside world had been mixed so far. His small harness was too big for him, which caused him difficulty as he struggled to get used to the lead. Like most puppies, he was good at trotting along beside you once he got going; however it was the getting going that was the problem. 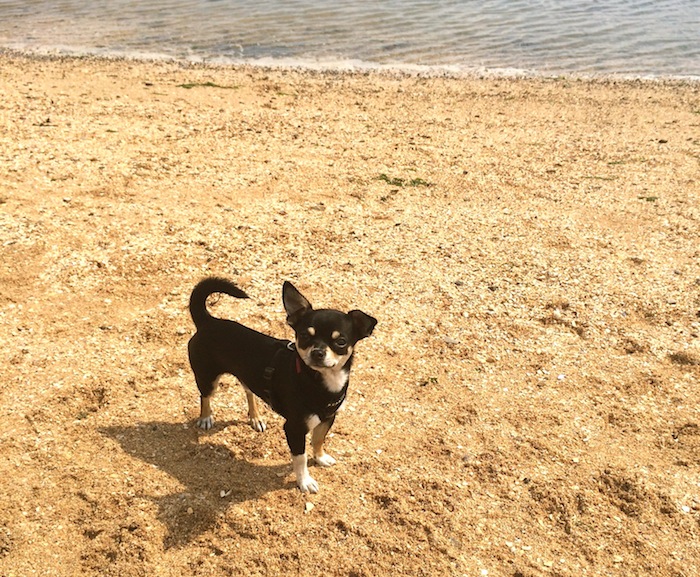 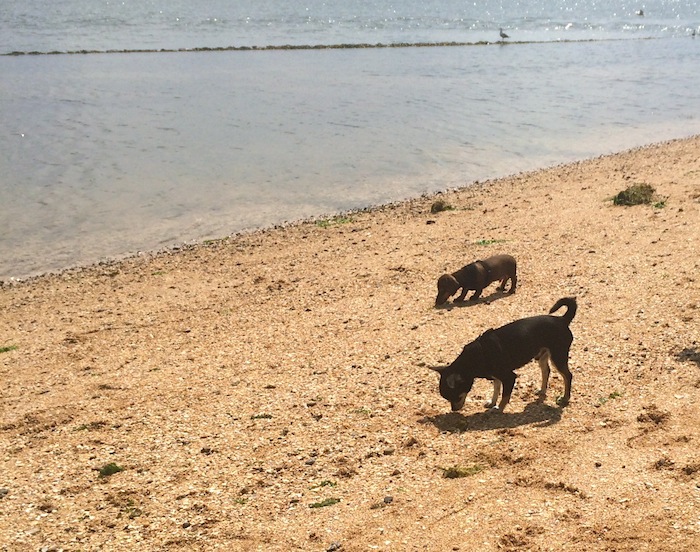 We live opposite a golf course that allowed him a chance off of the lead to run through soft grass at his own pace. It was clear he enjoyed this very much. He did not much enjoy the company of other dogs, however. Otto was in full bark when his fellow canines were at a distance, yet a whimpering piglet when they decided to come and meet him. A particularly spirited Spaniel once caused Otto to make such a squeal I feared for his safety.

We had not been shy in getting him used to the outside world. Daily trips out had him used to people, cars and general commotion.  A trip to London visiting the cooing colleagues at both mine and Emma’s places of work, plus two tube journeys and a quick pub trip, had not seemed to trouble him either. Other dogs still proved a challenge for Otto though.

Canvey Island may not have been our first beach choice, but the opportunity for Otto to interact with Chihuahua Buddy was just what he required. Not much bigger than Otto, Buddy is a shy but cheeky little dog. He is used to other dogs, with two older siblings, so we knew Otto wouldn’t phase him.

Following a rather coy getting to know you period, Buddy and Otto soon got used to each other and were trotting along the small strip of high tide shingle happily. A couple of mongrels, fresh from a swim, decided to visit our little spot of beach, which caused the new friends to huddle together in a rather sweet act of bonding. After much fun in the sun and a short walk to find a spot of lunch, both dogs were tired out, enjoying much attention from passers by of all ages.

Otto had finally found a friend in Buddy and we felt that our trip to the beach had proved fruitful in helping him get used to others of his own kind. We hope that his forthcoming puppy training classes will help make him even more sociable.

Planning a trip to the beach? Make sure you check our our guide to the UK’s Best Dog Friendly Beaches!

Deck the halls with bacon and sardines – trah la la la laaah! The silly season has officially landed, which means one thing (apart…