Everyone knows the French are a Poodle-loving people, so when we were invited to a pooch-friendly wedding in the Alps this Summer, we thought, why not make a little road trip of it.

Taking one for the team, George and I had the arduous task of staying in some glorious pet-friendly chateaus and bed & breakfasts to report back to you (I know…..when will this hell end!?) From fromage to fruity frolics, here’s the best bits from our French adventure. With a very full car and an excitable dog, our little road trip would take us from Hackney in East London, 700 miles down to the wedding in the French Alps. Not keen on attempting the drive down in one stint (there’s only so much eye-spy you can play), we decided to stop for a night in beautiful Burgundy.

Arriving after dark at Chateau de Vaulx, we were warmly welcomed by a lively pack of Jack Russells and fabulous host Marty, who bought two much-needed glasses of ice cold vin blanc with haste. It wasn’t until the following morning that we got to see the stunning Chateau in all its glory. Dating back to the 14th century, this elegant gem is perfectly perched atop a hill with unbelievable views over the lush surrounds of Saint-Julien de Civry and Saint Germain.

With a three generations of dogs calling Chateau de Vaulx home, pooches are welcomed with open paws and we got plenty of amusement watching rather hot staffy called Rosie cool off in the fountain while we enjoyed a home made breakfast in the meticulously manicured garden.

Next stop………wedding! Set against the breathtaking backdrop of the French Alps, the nuptials took place in a little restaurant on the side of a mountain near the small resort town of La Tania. Normally blanketed in a layer of thick white snow and with a pair of skis being the best mode of transport, the scene was rather different in the Summer with us basking (or more like roasting!) in temperatures in the high 30’s.

Now George was not the only canine guest at the wedding, he was  part of a motley marital trio made up of a snooty Norwich Terrier called Bramble and a cheeky Jacka-huahua called Buddy. Not wanting to be outdone, he sported his favourite Silly Buddy bow tie in a polka dot to match my frock – et voila! Speeches are so boring zzzzzzzzzzzz………..

In need of some serious R&R following three days of wedding frivolities (and one too many sherbets), we headed south to the glorious Ardèche. Ready for a total change of scenery, we were transported from the imposing mountains of Alps to a lush expanse of national park and dramatic gorges.

Looking for our small Bed & Breakfast, we headed off the main road, into the park and through a series of winding country roads enclosed in a forest of trees. Just when the sat nav was reaching the limit of its quite frankly weak powers, we rounded the bend and spotted Les Chambres du Clair. An amazingly isolated little peace of heaven nestled right in the beautiful green countryside, it was just the ticket for two jaded wedding guests and a dog.

Having owned this dream property for over 20 years, husband and wife team, Martin and Jean-Paul Marchal spent many years restoring it and finally realised their dream of turning it into a boutique bed & breakfast three months ago……and boy were we glad that did. With just one guest room (although you can also arrange to book other rooms in the main house), Chambres du Clair is an extremely intimate little affair and we were spoiled from the moment we arrived.

Keen to send us into a state of total bliss, Martine ushered us to the outdoor table where the four-course home cooked extravaganza began. Chilled courgette soup followed with succulent local pork and buttered spuds, then a drool-worthy serving of home made meringue and vanilla ice cream, all washed down with a light local vin. Already bursting at the seams, we then made room for a cheese board of fromage delights and a digestif of course. 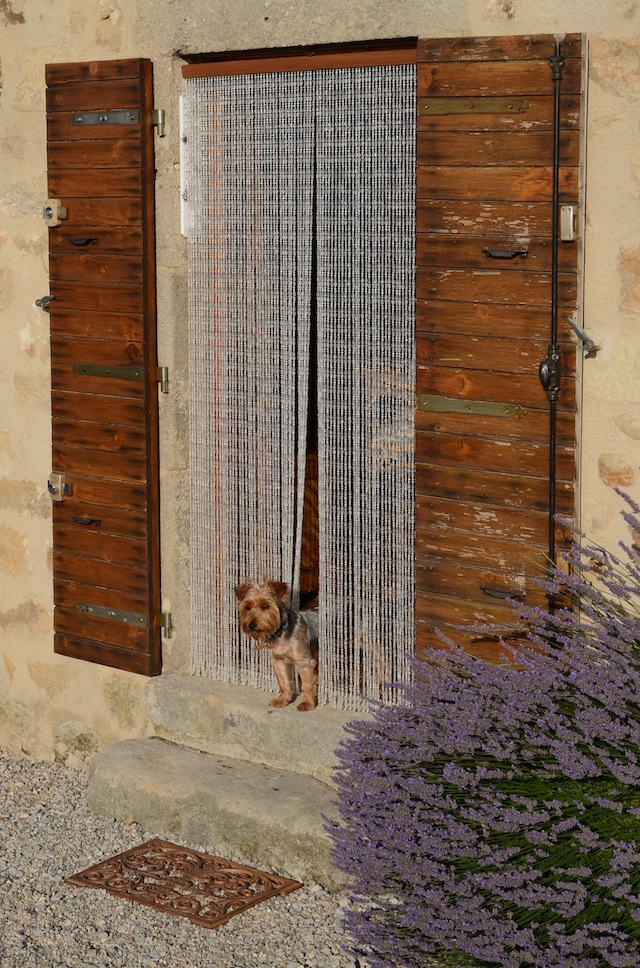 George making himself at home in the kitchen 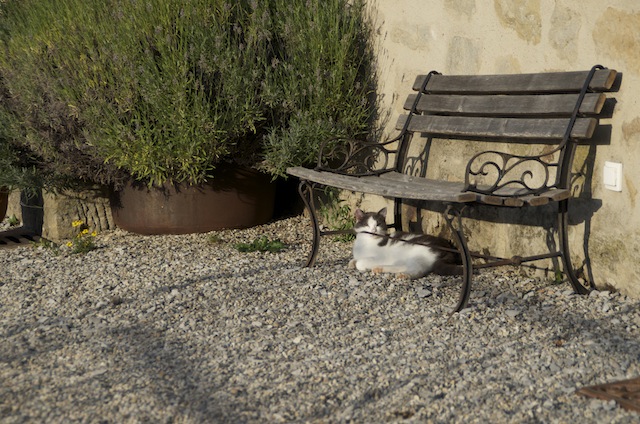 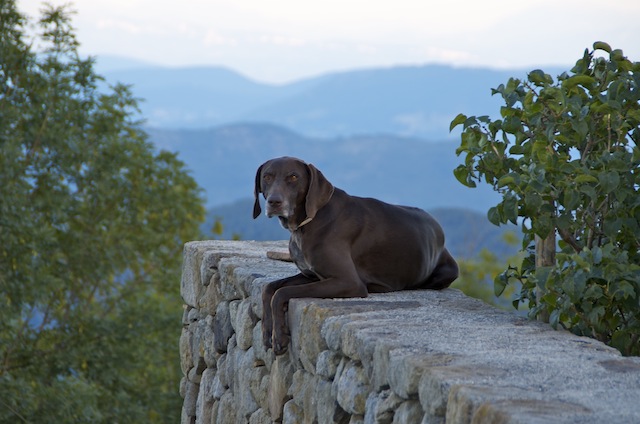 Apart from Martine’s unbelievable home cooking (oh yes, there’s a breakfast of fresh yoghurts, preserves, pastries and her famous chestnut cake to try too), they are also huge animal lovers. Their two beautiful dogs, Mia and Lily roam the property along with three cats. Knowing we were in need of a good sleep-in, Martine and Jean-Paul kindly offered to take George with them on their morning walk. Best of all, one of the cats goes with them for the journey – George found the whole thing rather amusing!

Rooms at Le Clair from £66 per night including breakfast and Martine’s amazing four-course dinner, plus pooches stay free –  AMAZING! www.leschambresduclair.com or  www.airbnb.co.uk Stuffed to the brim and with the spring back in our step, we left the Ardèche and headed back up to Burgundy for our next stop – Chateau de Burnand. With a population of only 45, there’s no chance you can miss this huge Sleeping Beauty style castle in the teeny tiny village of Burnand near Cluny.

A complete change from our petit farm house in the Ardèche, this seven bedroom wonder was creaking at the seams with mysteries to explore. Bought by Dutch artist Nico Vrielink in 2006, the Chateau is now run as a Bed & Breakfast by his ex-wife Jeane Seah. As the muse for much of his work, Jeane and their two sons adorn almost every wall of the property, amongst a whole treasure trove of intriguing pieces to ogle at. George perched on his throne (naughty!) in the Rose Room at Chateau de Burnand

Apart from the 35 acres of property and gardens to explore at the Chateau, there’s also plenty of beautiful walks which are a treat for playful pups. We packed up a picnic and took George on a 12km trek from the neighbouring town of St Gengoux Le National, through fields, vineyards and forest, over to Burnand and back again. Feel free to reward yourself with a chilled vin to finish – parfait!

The fact that we were now coming to the end of our little road trip and almost back on British soil, could have been reason for tears and howling when we reached Normandy, however our last few days at Le Petit Manoir de la Vernelle were so utterly wonderful, we didn’t really mind.

Fed up with city life, owners Stéphane and Fabien ditched the bright lights of Paris and bought this 18th century manor in rural Normandy. After months of painstaking restoration, they opened a four-bedroom bed & breakfast – Le Petit Manoir de la Vernelle  just two months ago. Despite being relatively new at all this, they wasted no time in welcoming us into their beautiful home and treating us to a whole host of local delights including their home made preserves and a tipple of cider. 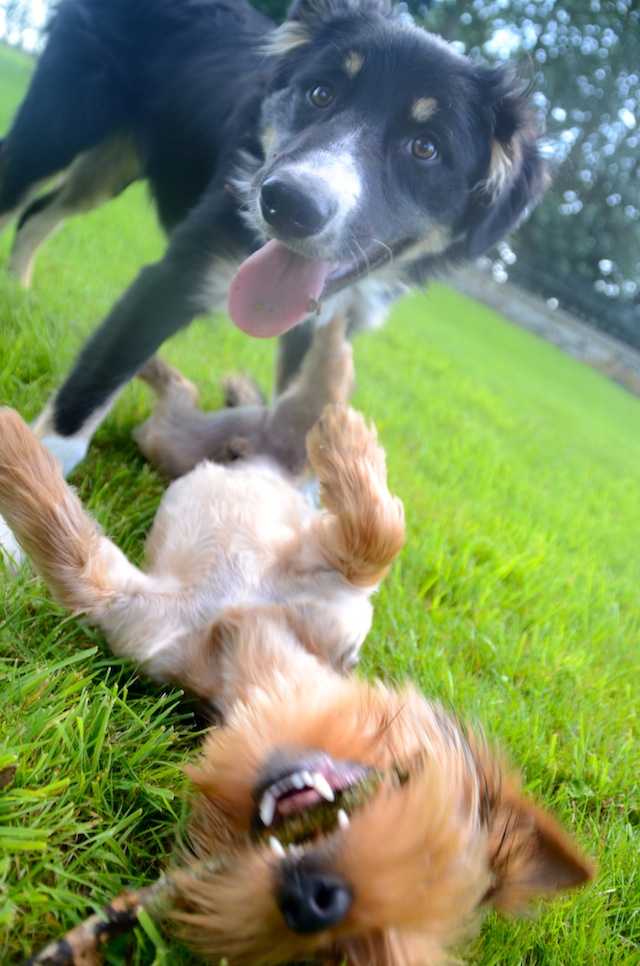 Since setting up, they’ve also acquired quite the little family, with sheep, chickens and a five month old Collie called Iggins. George got straight down to some serious play with his new pooch pal, which went on for three days until both dogs were utterly exhausted. There was also a stand-off between George and a herd of sheep which ended in him running away like the wind! Clearly not working dog material.

From Le Petit Manior it is about a 30 minute drive to the pretty seaside town of Honfleur, so with the sun blazing and only one more day to enjoy as much French fare as our stomachs would allow, we set off. The saturday food market was in full effect with more goodies than you could poke a greedy paw at – from Camembert de Normandie to local cider and preserves, we really pushed the boat out…..ahoy! Bon Voyage! We like to be beside the seaside in Honfleur

Have you been on a Summer adventure with your pooch?

ps. If you’re headed off on your own Summer road trip – make sure you check out our Top 10 things to pack for your pooch.