StyleTails speaks to model, dog-lover and wife of Rankin, the amazing Tuuli Shipster with her trio of trendy pups, Pickle, Beans and Tombi.

Tuuli Shipster is totally infectious, in the best possible way. Bounding into the beer garden of the pretty Primrose Hill pub with her rescue Whippet Beans,  the model, muse and wife of fashion photographer Rankin is full of errrrr, beans.

It’s not hard to see why, after having met Tuuli on an Elle MacPherson Intimates shoot in 2003, Rankin became, well, rather obsessed with her. With a South African mother and Anglo-Dutch father, Tuuli (her middle name), has definitely been blessed in the beauty stakes, with those annoyingly amazing cheek bones and a body that immediately reminds you, you need to go for a run.

But apart from looking lovely, I was delighted to discover that she is lovely. So lovely in fact that we spent most of our afternoon together going completly off topic, laughing at our dogs and generally annoying everyone else in the pub.

You’ve worked on some amazing projects in your modelling career. What has been the most fun job you’ve ever done?

Definitely the launch of the James Bond book, Devil May Care. I got to fly down the Thames in a speed boat wearing a red leather cat suit. How often do you get to do that? I refused to wear a life vest after I saw Daniel Craig wearing one and it looked lame. I was also one of the Santa girls in Love Actually that were dancing and playing the Saxaphone (well, pretending to) with Bill Nighy. I loved those Santa suits.

What would you have done if you didn’t go into modelling?

I originally wanted to study Politics and Economics. I had got into LSE and was going to model for my gap year. I then got a job abroad over freshers week so deferred for a year. I guess I’ve had a gap life!

You’ve been modelling since you were 16, do you still love it?

Modelling’s been great and I’ve had such a wonderful time doing it but I turned 30 last year and it felt like time to do something different. I’m actually about to start an intensive nine week course in LA to become a Bikram Yoga Teacher which is very exciting.

Bikram Yoga is pretty hard. I did it with a hangover once and nearly died. What do you love about it?

You tried it with a hangover!? That’s crazy! It’s definitely intense. I do it about four times a week at the moment and apart from all the physical benefits, I love the way yoga gives you some head space and calm. It really helps you focus.

Is this the end of modelling for you?

I’ve done and seen so much through modelling which I’ll always be grateful for, but like most jobs, it does run its course. It can get a bit disheartening being judged on your looks all the time. I’ll still do some modelling work, but it won’t be my main focus. I’m at a point now where I can just enjoy doing the fun stuff, like messing around in the studio with Rankin and doing things like our dog calendar which is a real laugh. 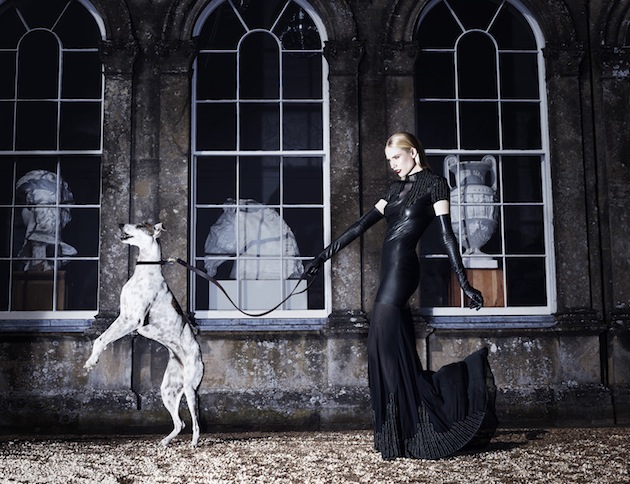 Tuuli & Pickle in a Rankin shoot for Jitrois.

You and Rankin have got three dogs. Have you gone dog mad?!

Yes, it’s crazy having three but we love it. Because we live and work from the studio in North London, they are great stress relievers and so much fun to have around.

Tell us a bit about them?

We have Tombi, she’s a 13 years old Jack Russell, that I’ve had  since I was 18. She’s quite a grumpy old lady now, we call her Linda Blair after the actress who played Regan in the Exorcist. We also have Pickle who is a four year old Lurcher that we rescued from the RSPCA. And lastly, Beans, a little Whippet who is just over a year old and we rescued her from a little charity called the Greyhound Gap.

Rankin thinks that I’m their favourite so he wants to get a fourth that will love him most. I told him it doesn’t work like that – I feed them and take them for three walks a day over at the Heath so they’ll always love me best. Rankin & Beans look down the lens

How did they get their names?

My mum is South African so the name Ntombi (Tombi) came from Xhosa, meaning little girl . Pickle was named by the RSPCA because he was in such a pickle when they found him and he has definitely lived up to his name. In one of the first photos we saw of Beans, she was put next to a can of beans to show how small she was. Apparently she was so small she blew over in the wind. I also thought it went well with Pickle!

What mischief have they got themselves into?

I’ve had many pairs of designer shoes chewed to bits. My Lanvin boots are full of teeth marks and for some reason they always seem to go for the nice lingerie, never the M&S pants.

We love your annual dog calendar. How did the idea come about?

We first did it five years ago just with Pickle and Tombi for my parents and it’s grown from there. We’ve done a Horoscope themed calendar, Dogue, which was take on doggy Vogue and last year’s was films. I’m still trying think of this year’s theme. I need some inspiration!

Beans stars as Holly Golightly in Barkest at Tiffany’s

What has been the funniest moment shooting the calendar?

A couple of years ago when we did horoscope calendar, we had Tombi in between two ancient taxidermy lambs and she suddenly pinned one to the ground and tried to maul it. I think it may have lost a tail.

Which is your favourite image from the last year’s Film Calendar?

I love Reservoir Dogs. All the dogs look so cool and they’re such different characters. Also, Tombi totally looks like the leader of the pack she is! 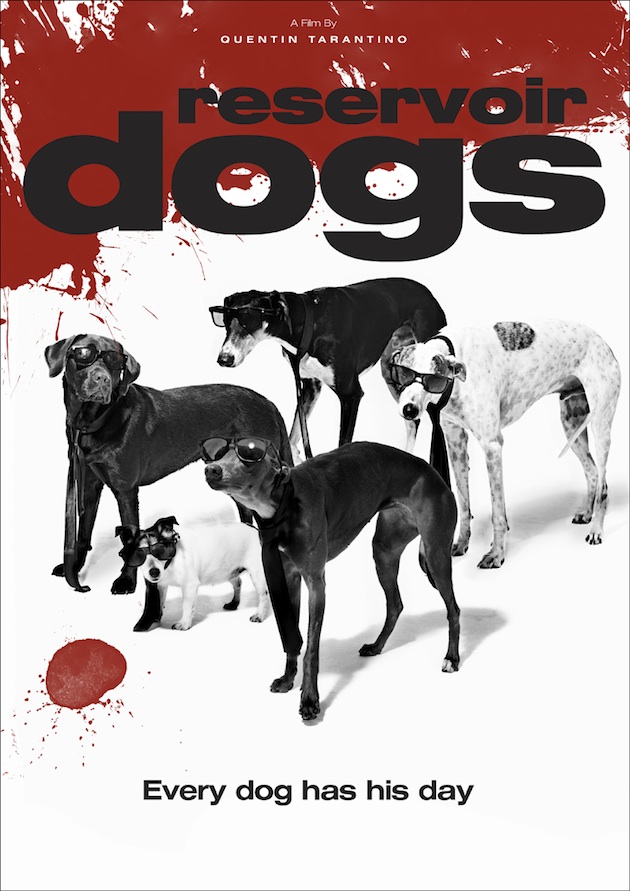 Beans and Pickle are both rescue dogs. Do you think people should rescue rather than buy?

There are so many dogs who desperately need homes and I’ve found it so rewarding giving homes to two dogs who’ve had such a rubbish start in life. If you’re patient and look hard enough, you can pretty much rescue any breed and any age. 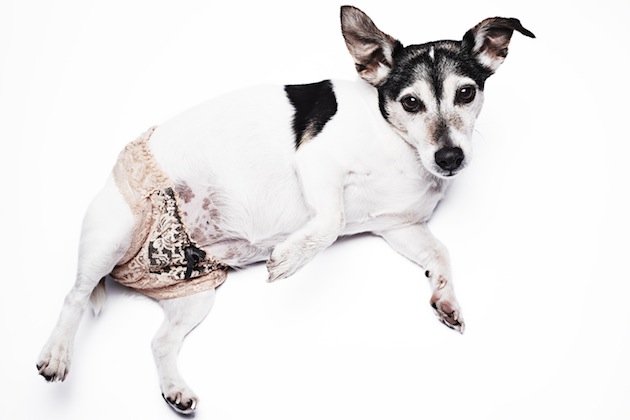 You’re 13 now. What’s the most valuable thing you’ve learnt in your life?

No matter how much you bark at the bottom of a tree, the squirrel will never come back down

What would you do if you were Queen for a day?

Who spoils you more – Tuuli or Rankin?

Rankin. I have him round my little claw Not afraid a some male grooming, Pickle in Tuuli & Rankin’s Dogue Calendar 2011

What would be your last meal?

That’s hard. Either Squirrel or two cans of Lily’s Kitchen Goose and Duck Feast with Fruits

Sleeping in my place on the bed

Who’s your ultimate style icon and why?

The Pink Panther, although he is a cat. Grrrrrr 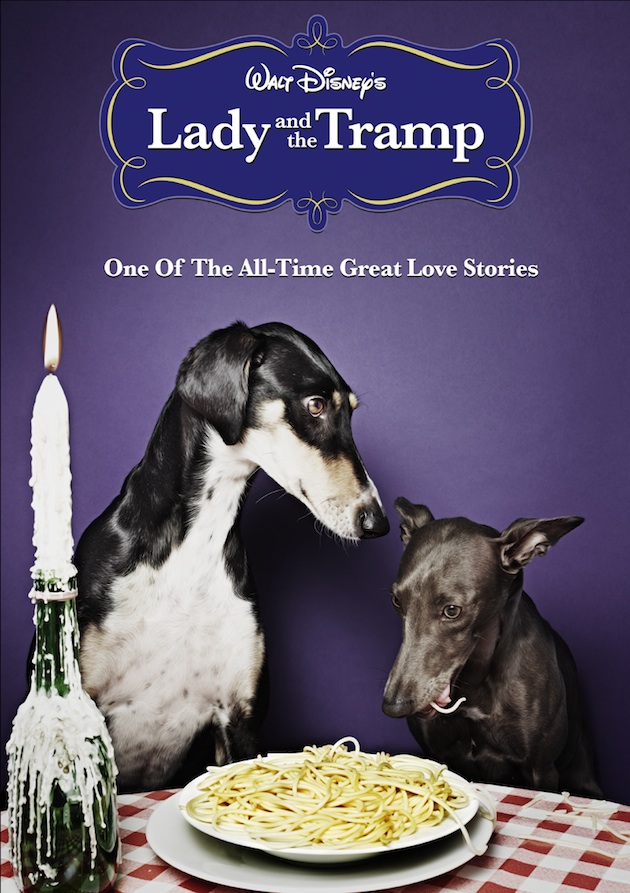 Describe yourself in 3 words?

Lady and the Tramp

Who’s your ideal man and why?

Pickle, because he’s the ultimate Tramp

What a crew! I think I love them all……

*All images courtesy of Rankin

Move over Uggie, the four-legged star of this year’s Cannes Film Festival is none other than a ginger tom cat. Traditionally the territory of…