Imagine my near, pants-wetting levels of excitement when I was asked to judge the Paw Pageant at Spitalfields Market last Monday in support of Battersea Dogs and Cats Home. For the second year in a row, the coolest canines came from far and wide to compete for fame, glory and mostly for treats…….but also for GLORY damn it!

The atmosphere was abuzz as the day kicked off with a catwalk (eeeerrr dogwalk?) show from East London label – LoveMyDog. The crowd ooohhhh’d and aaaahhh’d as 17 delightful dogs from Great Danes to Dachshunds strutted their stuff in some super stylish threads including LoveMyDog’s Hoxton Tartan, Harris Tweed and even some classy headwear……nothing sets off an outfit like a deerstalker cap.

Dixie in her pink Pixley Tweed waiting for her big moment 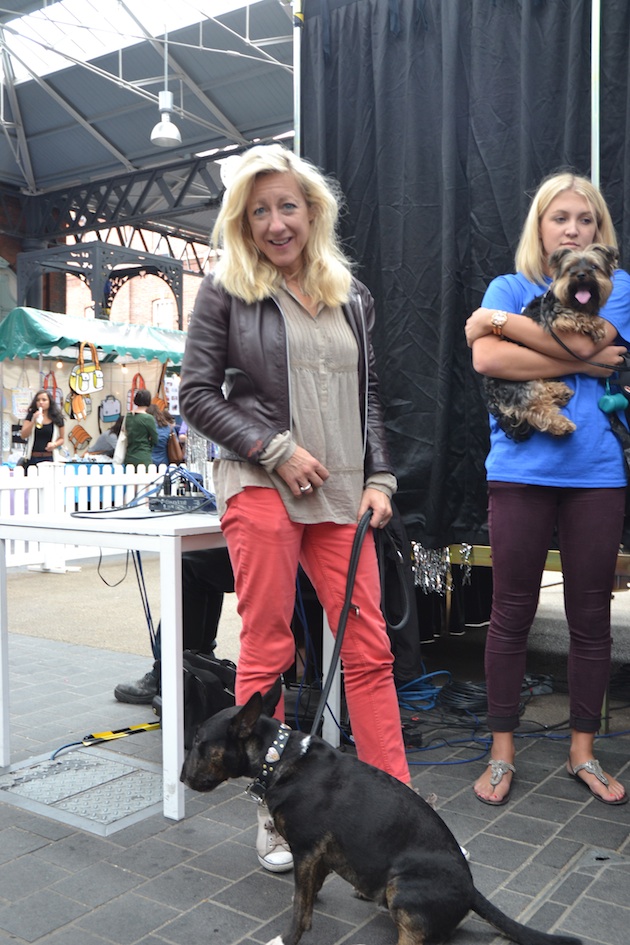 The two Frenchies Huxley and Rupert went on strike claiming they couldn’t go on without Champagne and cigarettes.

The Danes Bellamy and Puppy, ready for any weather in their Fisherman Macs

The Show Must Go On!

After some hissy fits, torn up waivers and indiscriminate weeing (it was something like a Dior runway show I imagine), The LoveMyDog show kicked off with father and son duo Bellamy and Puppy. The Great Danes wowed the crowds with their walk (which was compared to Gisele’s), their lovely silver coats and of course their MASSIVE SIZE.

Host Robin whips the crowd into a tail chasing frenzy

Rupert and Huxley in the Sidworth Tweed Collection…..finally got their champagne fix

The two Murphies in the Red Melton Wool coats

Lenny (and his tongue) in a Blue Swanfield Bandana

Rabbit in a bespoke creation only fitting for the finale

The excitement was palpable as the crowd waited for the Paw Pageant to commence. With categories like ‘Best Bitch in the Ditch’ and ‘Dressed up to the K-Nine’s’, it was every dog for himself. Myself and my fellow judges – Anna Webb co-host of BBC London’s Barking at the Moon along with Lilly and Lesley-Ann from LoveMyDog took our seats at the end of runway ready to be dazzled and amazed by the doggy talent on offer.

Shitzu in the Dressed up to the K-9’s category as a Venitian Gondolier. Bellissimo!

The Pearly King and Queen

A Royal Wedding – William, Kate and Pippa competing in the ‘Dead Ringer’ Category

Pomeranian competes in the ‘Best Show Off’ Category

Molly has a kip while the judges deliberate

Two male dogs were joined in holy matrimony – How modern!

A great day was had by all, lots of money was raised for Battersea Dogs and Cats Home and then we all lived happily ever after……….

The LoveMyDog collection is available online at www.lovemydog.co.uk

We know you love a bit of pampering, and with some of the most luxurious spa hotels in the UK also welcoming dogs, there’s…